Creative Inspiration Photography Tips
Johnathan shares his process and walks us through how he captures stunning drone images. 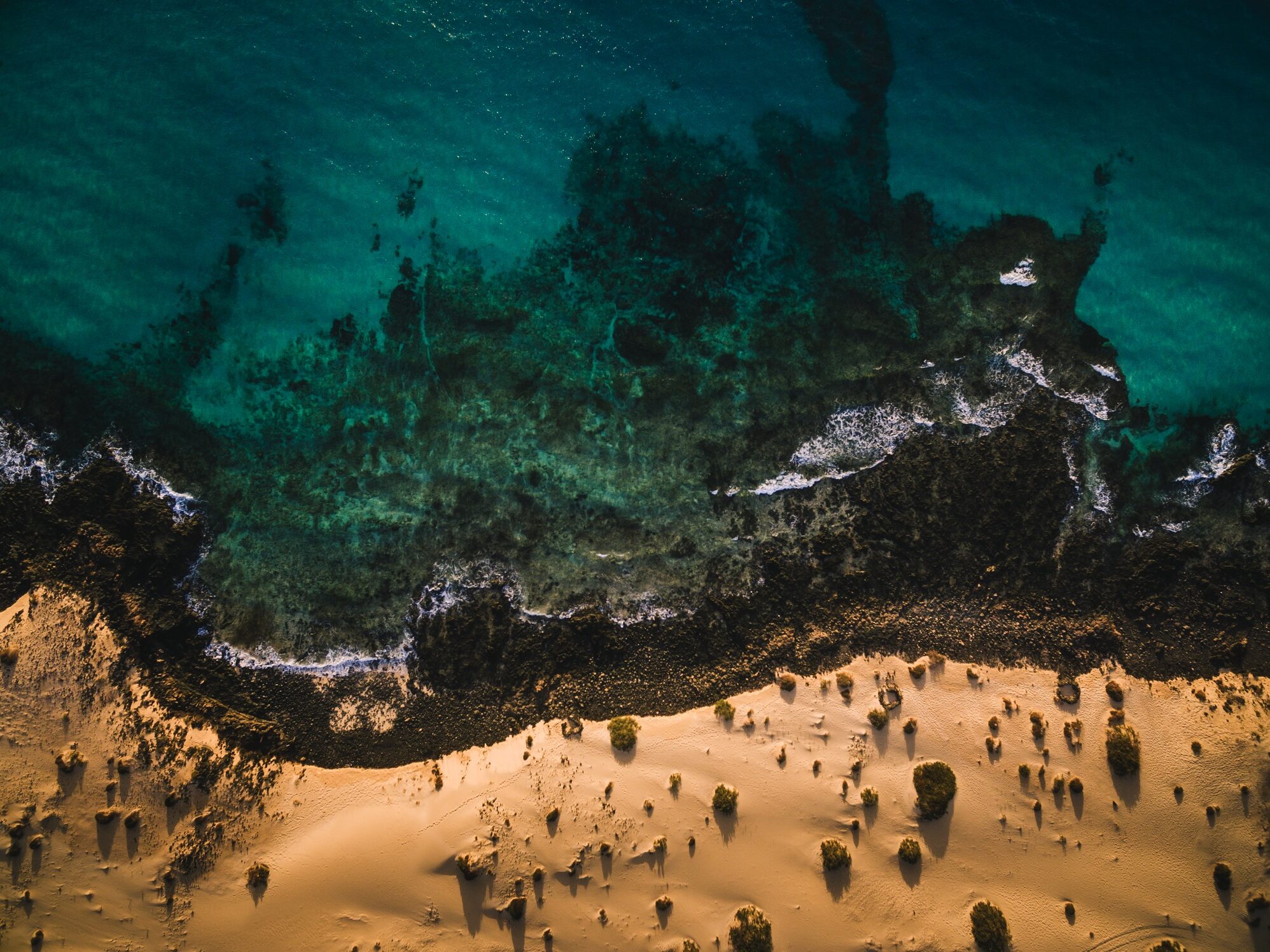 Johnathan Conlon is a self-taught travel and landscape photographer with a passion for aerial imagery. This passion developed while experimenting with drones over the last few years and experiencing the flexibility and freedom of using drones to capture images.

We caught up with Johnathan to learn more about his background, creative process, and how he captures incredible images by drone.

Hi Johnathan! Tell us a little about yourself — when did you first become interested in photography and how did you get to where you are today?

It’s funny, in a way I’ve always been a ‘travel photographer’ because my earliest memories as a young kid on family trips include taking rolls of film to be developed and that feeling of anticipation about how those snapshots would turn out. But I think even back then I was learning about light, and framing and all the basics, so it gave me a good foundation.

Fast forward 30 years and with the growth of social media it became the thing to share photos. So I just starting sharing and it genuinely went from there. I guess people were into what I was sharing. On Instagram, I got a huge buzz after I posted a photo from Iceland and it started getting picked up and reposted by some small landscape hubs, then it kind of went viral when Swizz Beats reposted it (don’t ask me how he ended up coming across it). Hat tip to him, he credited me on the post and from there it went pretty nuts. All the big landscape pages posted it, pages with millions of followers and my Instagram clout just instantly spiked. At one time I had around 18,000 followers, mainly down to that one photo. Outside of that, I joined EyeEm and shared some stuff there, and I guess they were into it as they featured me and put me on the home page which was really cool. I’ve had features on Tumblr, NatGeo, the BBC, a bunch of places really. All from posting photos on social media.

So, just keep on sharing because you never know how quickly people will jump on it and be really into the stuff you’re shooting.

Tell us about a challenging shoot and what made it worthwhile. What did you learn from that experience that you carry forward in other shoots?

One particularly difficult project was with Maserati when a friend of mine, Sandra Mode, and I were asked to get involved in a shoot where we’d head off to the wilderness with a luxury sports car to create content. I’d got it in my head that I wanted to make a short drone video but it was genuinely so hard to get it looking good. After multiple attempts we got some ok footage but I wasn’t that happy with it and I have the utmost respect for aerial videographers who effortlessly create amazing scenes. That was a tough one.

In terms of what I got out of that, it taught me that you really have to plan your vision properly, and have a definitive concept of what you want to capture in order to execute that vision. I plan better these days!

What is your favorite subject to photograph? What is inspiring about this for you?

That’s a tough question because there are a few, but if I had to pick one, I’d have to go with the ocean. There are an infinite number of opportunities to capture a scene that can’t be replicated, which is probably the most inspiring aspect. And just the textures and depth that can come from certain light and waves, abstract shapes, the colours, I love all of it.

Can you walk us through how you approach an upcoming shoot or location?

Sure. So as an example, I had a family trip to Fuerteventura in the Canary Islands, and I knew my shooting time would be limited. This first shot is one of my favourite photos. It’s kind of minimal but with a unique aspect, highly contrasting features, and the main thing that stands out is the low light, creating those long shadows, so much so that you can actually make out the people sitting on the bus.

My process begins on Google Earth. I literally love Google Earth, I think it’s incredible, and it’s the first step in my process. So, I pull Fuerteventura up, and an area immediately grabbed my attention, fairly close to where I’m staying, which was totally covered in sand like a desert.

Zooming in, a few compositions stood out, such as this one where the road runs close to the ocean in a fairly incongruous, human vs nature kind of way.

Then a quick topography check showed me that the landscape was pretty flat, and being on the east of the island, I knew I could get some long shadows if I went there at the right time of morning.

But when would be the right time? Another amazing tool I use is called TPE, or The Photographer’s Ephemeris, which is essentially a sun & moon calculator. With TPE you can simulate how light will hit your chosen location at a chosen time. This example shows how the sunrise will produce light on this scene shortly after 7:40am in mid-September (the time when the image was shot). So as long as I was there and set up for that time, and cloud willing, I’d be pretty much guaranteed to get some long shadows perpendicular to the road.

The section that looks like wavelengths at the bottom is scrollable, so by moving this left or right to go backwards/forwards in time, you can visualise the exact angles that light will be facing. So with the shadows facing slightly north west in the shot, the approximate time for this one would have been around 8:25am

After I made some notes for this area, I went back to Google Earth to continue scanning. I came across another point of interest in the nearby town of Corralejo, which I probably wouldn’t have noticed had I been exploring on foot. It was a waterpark, and popped out as visually interesting and the water slides made me think of drinking straws. I thought it looked pretty cool, so I made a note to swing by there as well.

As the park was still closed, it presented a great opportunity to capture the scene with safety in mind and I was really happy with how the shot came out:

It’s interesting understanding what your planning process involves. What other tips can you share for a successful shoot?

I do think it’s important to assess risk when operating a drone, as it’s basically a flying brick, so you do have to be safety conscious. I like to use airspace planners like AIRMAP to help with this.

Take this shot for example, taken in Thetford forest which is close to several Royal Air Force (RAF) bases.

With AIRMAP, I’m able to understand exactly where it’s ok to fly, and where the nearby restrictions are, which enables me to fully focus on composing and capturing the scenes I want.

If you could only choose one camera body and one lens in your kit, which would you choose?

I’m a Nikon head when it comes to cameras, so probably a D750 and my favourite focal length is 35mm, which is so versatile and can tell a great story. My favourite 35mm lens is the f1.4 Sigma Art prime lens.

What tools do you utilize for post-processing?

I shoot in RAW then make selects and edit in Lightroom, and if I need to do anything funky like take out something I don’t like, then I’ll use Photoshop. I have created a bunch of my own presets, which I go through for an initial quick look – that normally gives me a starting point but if nothing is looking right, I’ll just start from scratch.

What advice would you give to someone who is interested in this type of photography and is just starting out?

The main advice I wanted to get across is about how much you can gain from good planning, especially in terms of traveling. We are usually only in a spot for a finite amount of time, so the process I use helps me to optimise my time more efficiently. It’s like imagine you are scrolling through your favourite social media and you come across a perfectly lined up Manhattan Henge sunset and you think wow that person is so lucky to have been there at that exact moment — well yes, maybe, but you can literally plan to be there at that exact moment using the tools I’ve spoken about. I think that has been one of the biggest things I’ve learned in my photography journey so far.

Thank you for sharing with us, Johnathan! To view more of Johnathan’s work, check out his images on Noun Project, Instagram and Behance.

Interested in joining our community of photographers and contributing to Noun Project? Submit your work here. Check out more interviews with inspiring photographers on our blog.