Spotlight: Bernadette Rivero, Co-Founder and President of The Cortez Brothers

Creative Inspiration
Bernadette was nominated by The 3% Movement to be featured for her outstanding impact. 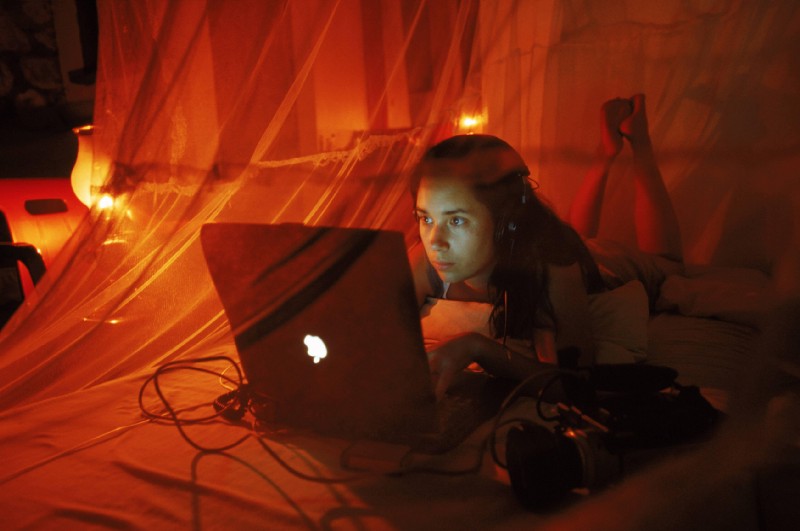 Bernadette Rivero in her early days of production, field editing in the Guatemalan Highlands (Photo by David McLain)

This interview is part of our Empowered Women series in partnership with FREE THE WORK, The 3% Movement, The Female Quotient, and TIME’S UP Foundation — a coalition effort to champion more equal and accurate representation of women leading at work, at home, in their communities and beyond. Read more about this initiative here and download images from the Empowered Women collection here.

Bernadette Rivero is Co-Founder and President of The Cortez Brothers, a creative broadcast production company. Based in Los Angeles, the company has an incredible roster of directors and creators that cross international borders and genres. Prior to joining The Cortez Brothers, Bernadette worked in advertising and broadcast journalism at CNN, NPR, and Marketplace Morning Report.

We spoke with Bernadette to learn more about her work, how current leaders can help support the next generation, and what inspires her as she looks to the future.

Hi Bernadette! Tell us about yourself — how did you get to where you are today? What was your career path?

Honestly, I like putting ideas, data, and graphics in order, and a high school English teacher noticed that. She helped me get out of a job as a grocery store clerk and into one as a marketing assistant at an in-house ad agency when I was a teenager. I learned how to assemble targeted niche consumer data before I got my driver’s license, took a detour into journalism for a few years, and ended up creating content for a living down the road. I have a degree in English Writing and really enjoy the collaborative process of hunting down and developing stories that can be executed technically.

You began your career in advertising, then made the jump to working in broadcast journalism at CNN, NPR, and the Marketplace Morning Report, and now you are President and Co-Founder of The Cortez Brothers, an outstanding creative broadcast company with an incredible roster of directors and content creators. What is one of the biggest lessons you’ve learned during your career and did you have a mentor throughout your journey?

Screen sizes will come and go — from giant movie screens, to smaller TV and computer screens, to videos you can see on a tiny digital watch face — but truly good content starts with great character development.

In terms of mentors, Edie Rosenfeld was the marketing executive at Jacobson’s Department Stores under whom I first worked, and I’m still in touch with her today; she’s the reason I’m passionate about targeted niche audiences. She taught me that you don’t always have to reach the biggest audience, sometimes you just have to reach the right one, at the right time, with the right premium message.

Your experience includes work for some of the world’s best-known brands like AT&T, Coca-Cola, Ford, McDonald’s, Toyota and more. When it comes to brand storytelling, what is your creative process like and what are some of the biggest shifts you’ve seen around how companies are approaching multicultural storytelling?

Creatively, we always start with the director — What is the director’s vision, how does it align with the agency or brand’s concept, and how can they elevate it? What insight about the audience, or story, can they bring to the table? Now that companies are finally making space around that table for multicultural points of view, having directors on my roster who have something special to offer, because of their lived experiences, means I get to bring all their rich left-of-center POVs to the party.

What are a few keys ways current leaders can help nurture the next generation of women in leadership, particularly in creative roles?

Creativity is the death-defying act of balancing all your hopes and fears and budgets on the creation and execution of Intellectual Property, and for I.P. creation to become more inclusive we need to talk about who’s invited in, and when, to develop content. The earlier diverse production partners are brought into the process, the more time we have to develop relationships, and those relationships are how we develop opportunities and creative careers.

What are your thoughts on the power and importance of visual representation to help change the status quo and champion more women in leadership across industries?

I definitely never saw myself on TV or in films growing up, and that sticks with you as an adult. I find myself being very aware of who’s missing from a story, a pitch deck, a script, a casting call, a call sheet. I’ve found that if I surround myself with collaborators who notice who’s missing, too — because they’ve been in the position of being on the outside looking in and observing — we make interesting content together.

When you look to the future, what inspires you and what initiatives are you currently most excited about?

I’m excited that, in the last few weeks, I’ve seen my first two job leads asking for minority-owned production companies to submit directors — I honestly never thought I’d see that in my lifetime. Everyone’s always talking about making commitments to have diverse crews and directors, not understanding how that puts the horse in front of the cart. My last production crew was 70% ethnic minorities, 30% Latina, half women, two women directors, and that’s pretty typical for a Cortez Brothers, Inc. production because we’re the missing element that brings wider-scale diversity, in bigger numbers, behind the camera. I want to keep talking about the role diverse production companies play!

What advice would you give to women in the workplace as they navigate the path to leadership?

If you’re one of those women who’s always “The Only One In The Room,” you might as well lead if everyone’s going to be staring at you anyway.

About The 3% Movement
Started to spotlight a huge business opportunity in advertising — the lack of female creative leadership and its impact on connecting with an overwhelmingly female marketplace — The 3% Movement has grown exponentially since its 2012 launch. Hosting events in 27 cities globally and offering consulting and certification programs that amplify creative cultures, 3% has helped drive the number of female creative directors in the U.S. from 3% to 29%.