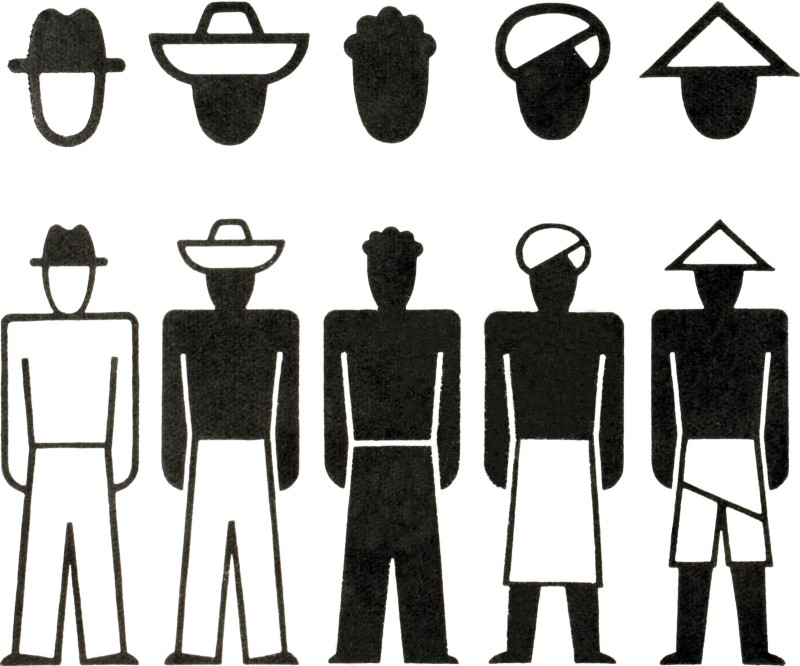 One of the earliest formal depictions of race was the International System of Typographic Picture Education, more commonly known as isotypes. Concepted by Otto Neurath and designed by Gerd Arntz.

Icons are a simple, visually concise, and smaller scale medium that essentializes things that are often more complex than the sum of its parts. Successful icons highlight the most relevant, important, and distinguishing features of their representations in a limited space. As a result, depicting something as complex and charged as race proves to be very challenging. Making icons depicting race and ethnicity in a proportionate, accurate, and respectful way is a glaringly silent design problem waiting to be solved.

Visual conciseness and recognizability is fundamental for icons, but when it comes to portraying race, that pursuit can quickly turn into gross overgeneralization. Many depictions of race — icons or otherwise — rely on outdated tropes, stereotypical depictions, or fetishized myths to accomplish recognizability. Such sweeping generalizations or constructions can articulate or perpetuate prejudices that may be harmful, limiting, or untrue.

Icons are presented as normalized standards seen in public spaces and mediums like parks, online news, government reports, school projects, hospital pamphlets, maps, public posters, and documentaries just to name a few. Since icons are trusted as neutral and authoritarian depictions that have high visibility in our globalized environment, it is crucial that race icons are accurate and respectful, thus aligning public perception with egalitarian goals through appropriate representation.

Portrayals and interpretations of race in academics, art, and media, and too many others to name have been studied as social constructs with long histories. Edward Said’s Orientalism, for example, details British and European colonialism in the Middle East and resultant harmful misrepresentations of the native people based on the colonizer’s sense of superiority. On arrival, the British defined the Middle East region and its various populations as the “Orient,” which had connotations of “Other” or “less.” These assumptions defined social, academic, and political confusion that acted as an “us” versus “them” foundation that brought harm to the colonized. Even now, constructions like this proliferate in evolving forms and continue to adversely affect how people are perceived and treated on a social and institutional level, and the resulting misunderstandings go both ways. Left unchecked, icons can become a form of latent racism.

Race here is defined as a way of classifying groups based on distinguishing physical attributes, especially one’s skin tone. Closely tied to race is ethnicity, which is defined as the culture and elaborate traditions created by unique groups, some of which are racial groups. While ethnicity is often closely tied to and shares overlap with race, it has less to do with physical appearances and more to do with culture; shared traditions, values, expressions, and references that can be adopted by people outside of the group or race that established them.

Icons of race should celebrate physical differences as representative forms because failing to do so will result in misrepresentation by homogenization. So we must accept that there will be some degree of highlighting specific physical characteristics, despite the incredible delicacy required to make that judgment. As an audience, we must not mistake physical representation to be synonymous with racism in an ironically internalized form of racism against the self. Secondly, since ethnicity and race are so closely tied, we must also recognize the customs, foods, drink, dress, landmarks, figures, and other references that make up the ethnicity of certain groups or races.

One approach to solving disproportionate representation and misrepresentation would be for designers to represent themselves. Authorship is the best way to reclaim your voice. Use it to establish identity and a point of reference for others to better and more intimately understand your identity.

In the case of making icons of other races, designers can make sure to get feedback from a diverse crowd. Having open, honest, and respectful conversations about race is a collaborative effort that helps everyone build connections and increase understanding. Present work to people of all ages, races, and ethnicities; present it to friends, family, colleagues, and strangers. Broader perspectives reveal blind spots and fresh opinions that help make the work more appropriate and true, or at least will help bring people closer to a collective agreement.

When creating representations of others, or racially comprehensive sets, here are some guidelines to consider:

Icons are intended to be a democratic means of symbolic communication that have a wider reach than written language because visual symbols can more easily transcend language barriers. We cannot ignore their impacts on our globalized environment because icons have high visibility and potential to influence public perception. Developing a global visual language that includes and celebrates race will be hard work that requires ceaseless adaptation in an ongoing conversation, but is absolutely necessary work. Designers now have the power and opportunity to connect people of all races and ethnicities by celebrating diversity through icon creation — a creative discipline that would inherently promote empathy, respect, and equality through interactive representation.