Creative Inspiration
Lorie Shaull is a photographer, videographer and icon creator. Her work has appeared on The Daily Show and her Ruth Bader Ginsburg icon has been used for everything from needlepoints to cookies, on signage and more. We caught up with Lorie to learn more about her creative process and her thoughts on iconography. 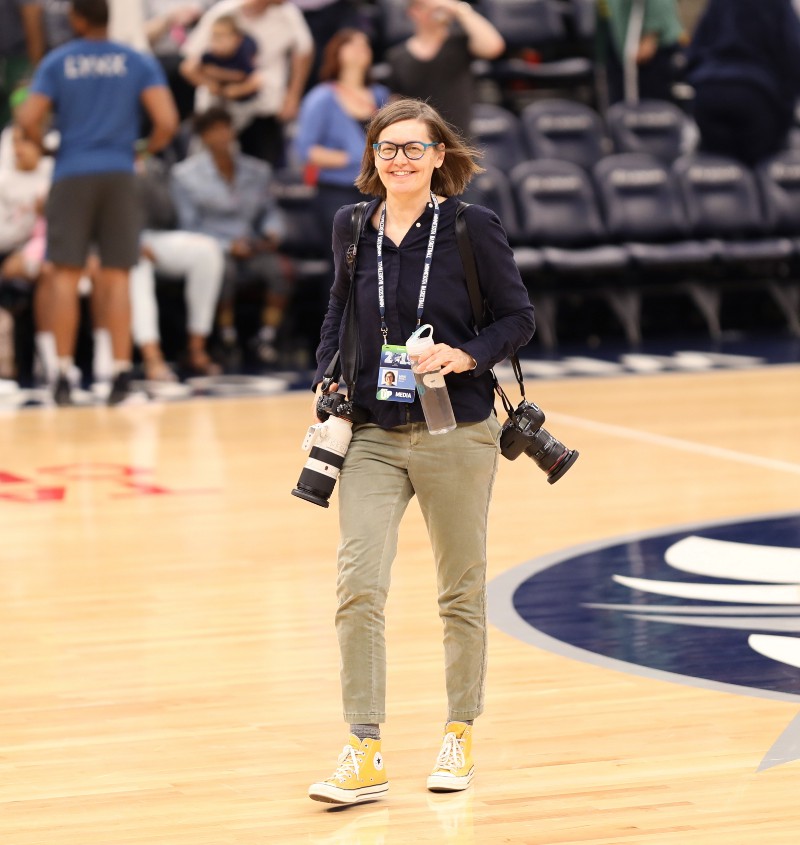 Hi Lorie! Tell us about your creative path — how did you get to where you are today?

Right out of college I started in photojournalism, in the film days of photography, but decided that path wasn’t for me at the time. For years, I worked in IT at a consulting firm in DC doing UX. I started as a technical writer but quickly moved over to design work. On the job, I learned early versions of Photoshop, Illustrator and even Flash.

Now, I’ve come back to photography on a mostly freelance basis with occasional video and icon projects. I get a lot of gratification from contributing to Wikipedia and, most recently, have been photographing WNBA games and working on capturing a quality photograph to represent WNBA players on their Wikipedia page.

You’re a photographer and a filmmaker — when did you start creating icons?

I started paying attention to creating icons while working as a technical writer in IT. I remember being bored and poking around in Microsoft Word and found I could change the icons on all the program buttons like ‘print’ and ‘save’ so I ended up changing all of them to totally irrelevant things like a cactus and an elephant. It was the first time I realized that a small collection of well placed pixels could represent an object. It was very satisfying. Shortly after that, I started creating icons for some of the software projects I was working on.

Some of your icon collections focus on politics and social justice. Can you tell us more about why you create icons around these themes?

It‘s important to me to visually represent events that are happening in the world. We already see, hear and write so many words about subjects that rise to the surface in the news; when I decide to create an icon, it gives me time to pause first and to explore and think over how I’d like to visually make my point. Hopefully, my creations resonate with others who might be thinking or writing about those subjects and they can make use of them.

I also spent a lot of time during the lead up to the 2016 elections making politician icons. The elections were frustrating to me, but I wanted to pay attention, contribute to the conversation and also work out some of my upset through creativity. It was basically art therapy.

Do you think that icons can have the power to influence public opinion?

Most definitely. Visual language is powerful. So much can be summed up with a well-designed icon. My partner is a pollster and she has used some of my icons, as well as other Noun Project icons, in her reports. A thoughtful report that highlights important numbers along with an icon can be a very powerful combination to get a point across quickly.

Tell us about your Faces of Feminism icon collection. What inspired you to create the collection and how did you decide who to include?

I created that collection for my partner Tresa, who is a public opinion researcher and pollster. One of the subject areas she studies is gender equality. She ran a survey focusing on women after the 2016 presidential election and one question asked respondents to identify well-known feminists in our culture. The top four results were Michelle Obama, Oprah, Hillary Clinton and Beyoncé.

Your Ruth Bader Ginsburg icon is truly loved by many — it has appeared on everything from needlepoints to signage and more. What prompted you to design this icon and what are some of your favorite ways you’ve seen the icon used?

I started learning about and paying more attention to Ruth Bader Ginsburg’s accomplishments when the Notorious RBG tumblr site went up back in 2013. She’s already iconic in our culture and also very visually recognizable so I decided to create an icon of her.

I loved seeing the Notorious RBG cookie show up on the tumblr site, that was probably my favorite just because I was off and on following the site and there it was one day when I visited. It was made by Chris Taylor. He’s an extremely talented baker and did a great job with it; so good that I could recognize the resemblance to the icon. It makes me happy to see it show up in people’s personal creative projects. I like having created an image that inspires someone to go create something new with it.

Just last week I was running an errand in a nearby neighborhood outside of Minneapolis and spotted a yard sign with my RBG icon and “I Dissent” written on it. To me, it’s a nice bright spot to see it out in the world, especially now with the Coronavirus challenging all of us. I encourage readers to use the RBG icon to make more creative projects if they’re stuck at home and in need of inspiration!

Any personal heroines who deserve their own icon?

Too many to list! But as far as thinking about what subjects I’d like to add to the Noun Project, I’d balance a degree of cultural recognizability as well as someone who’s inspiring to me. Right now I think I’d choose to work on a Harriet Tubman icon and include current heroines in our culture, like Coco Gauff and Megan Rapinoe. I’d also love to focus on a whole collection of female athletes. Women are underrepresented in all icons and, no surprise, that includes sports.

Where do you find inspiration and how can people see more of your work?

I get so much inspiration from Noun Project icons. My favorite creator is Luis Prado. I’ve been following his work from the beginning of Noun Project and admire his collection for both its consistency and how he’s managed to work playfulness into some of his icons.

I also recently discovered Zack McCune’s work. After seeing some icons that he’s made into lovely hand carved stamps and artwork, it got me inspired to want to make some of my own. I also love that he works at Wikimedia Foundation; I’m a big fan of Creative Commons licensing.

I’m also a believer in sharing knowledge and compliments. Winding road trips that lead to obscure and quirky locations and unique people might be one of my favorite things!

When you think about the future, how do you feel?

I’m always hopeful about the future. While accepting all current hardships and challenges I try to make a point of seeing things from different perspectives. For me, it makes life more interesting to be creative about how I decide to frame things.

Thanks for sharing with us Lorie! To see more of Lorie’s work, visit www.lorieshaull.com