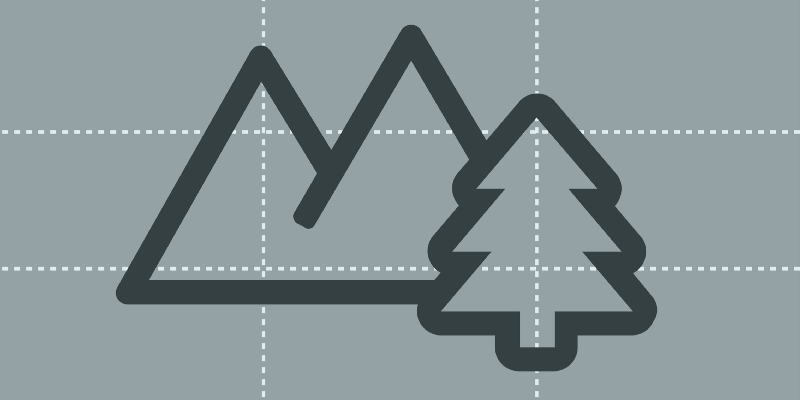 Using the Rule of Thirds in Design

The success of any design or photograph hinges on the use of balance, color, and other foundational elements of composition. When tasked with combining multiple disparate elements like text, photos, and abstract shapes into a single design, the challenge is to bring a sense of harmony and cohesion to the layout. Many designers, artists, and photographers use the rule of thirds in design as a simple way to bring a greater sense of visual balance into the frame, while consciously directing the viewer’s attention to key elements.

What is the Rule of Thirds?

The rule of thirds is a popular method of dividing up a design or photo into thirds by creating a grid that is three columns wide and three rows tall. Designers and photographers will frequently use grid layouts as guidelines for their work; in graphic design, breaking a canvas up into evenly-spaced rows and columns can help with common issues like aligning text, positioning photos, and generally arranging all the elements in a way that helps guide the viewer’s eye to ingest the information more easily (like reading a book). In photography, visualizing a grid overlaying the picture similarly helps direct attention and focus so the viewer doesn’t feel lost.

When the rule of thirds is used in design, the lines meet at four “intersections” at the center of the page, which fall upon the primary focus points of the scene. The human eye naturally lands on these points more readily than other spots in the composition, and the resulting asymmetry (of using the odd number 3, rather than 4 rows and columns) creates just enough tension to bring a dynamic sense of flow to the work.

It should be noted that this “rule” is meant to be treated more as a guideline. When designing, your intuition should always guide you more than any hard-and-fast rule about what works or doesn’t work. But many have found that maintaining at least a mental picture of this 3 x 3 grid is a handy, simple way to ensure that you’re directing focus for the highest visual impact.

How is the Rule of Thirds Used in Design?

It’s important to note that in composition, “asymmetry” and “balance” are not opposing concepts. When you think about a perfectly symmetrical photograph, the sense of balance is clearly strong — but it sacrifices a sense of movement and flow. Symmetry suggests stasis, rigidity, and even confrontation, as the symmetrical figure (or scene) appears to “stare you down” and stand firmly in place. Putting your subject more towards one side or the other invites a sweeping flow of motion, while giving you the chance to experiment by adding elements on the other side of the page that may provide a pleasing counterbalance.

The rule of thirds helps take the guesswork out of composition, as you can use the central intersections as guideposts for your content. So long as the main element of focus aligns closely with at least one of the 4 central intersections (or guiding lines), viewers will naturally land on the subject without having to visually scan around.

For example, you can deploy the rule of thirds in web design by placing a call-to-action button or other key element in one of these sweet pots, since you know the eye will naturally fall upon the four intersection points. If you want to call out key information in an event flyer, make sure the most important bits fall on (or close to) those intersections.

Using The Rule of Thirds in Photography

The rule of thirds can help photographers more easily zero in on striking compositions that provide the proper balance between subject and background. Many cameras have a built-in rule of thirds grid that automatically overlays your viewfinder with the three rows and columns (on iPhone, navigate to Settings > Camera > Composition > Grid to turn it on). Even without digital assistance, approaching your subject with a mental picture of how to divide it into three can help compose the frame more compellingly.

In landscape photography, it’s typically best to ensure that the horizon line falls along the upper or lower dividing line. Whether the ground or the sky (especially in a sunset pic) is the primary focus, giving each either ⅓ or ⅔ of the overall frame is the best way to achieve balance and help the viewer feel grounded rather than lost.

For landscape shots with large amounts of detail, think about where you want people’s eyes to land — and then move through the remainder of the composition.

In portraiture, remember to be wary of the “confrontational” or “static” effect of perfectly centered, head-on shots. Leaving a person’s face just to the side, on the contrary, will help add visual interest while softening the overall effect to bring a more natural, even conversational flow to the scene.

The eyes, of course, are always the primary focus of the shot that the viewer’s gaze will land on immediately. As such, try to align the subject’s eyes along the top horizontal guiding line — or better yet, at an intersection. Notice that while a viewer will always land on the subject’s eyes (typically within milliseconds), a subject that is too far from center may add a discomforting sense of tension to the scene.

If you’re photographing architecture, you can similarly experiment with the difference between a symmetrical head-on shot, or one that aligns a building’s most prominent features along the rule of thirds guiding lines. The latter will help the viewer ultimately feel that they are more immersed in the space, moving physically through it, as opposed to head-on shots that can feel like staring at a TV screen.

Of course, architecture can come in any number of wildly varied forms, and as you move throughout the exterior or interior of a building, you’ll want to be conscious of how you deploy the rule of thirds to capture:

Action photography is one of the best possible uses for the rule of thirds as it naturally lends a sense of motion to your composition. Framing a subject along one vertical guideline and leaving negative space along the other is an easy way to convey movement, and emphasize the direction of the subject. Bear in mind that if a subject appears to be moving too closely towards the edge of the frame, it will create a more dramatic sense of imbalance and tension.

Start Your Next Design with Noun Project

Noun Project is your one-stop shop to jumpstart your graphic design projects — search through millions of icons and diverse, inclusive stock photos to bring your creative vision to life. Looking for the quickest way to start experimenting with composition, layouts, and finding balance using the rule of thirds? Use the Noun Project Add-On for Adobe to instantly add, color, and arrange icons within Photoshop or Illustrator.